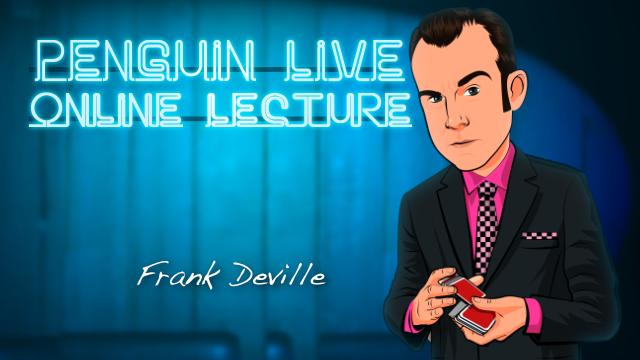 What will he teach?

Rope Through Neck- An extremely visual effect with an ordinary prop. The Rope Through Neck is a classic for a reason. You’ll learn not only how to pull a rope through your own neck, but also a special way to be able to have the audience pull on the rope to prove the rope is around your neck before it safely passes through.

Dye Tube- Frank teaches his personal routine of this classic effect. You push a white handkerchief into your fist and it comes out red. He teaches some unique transfers, steals, and a gorgeous production where one silk appears as the other one is tied into a knot. He also teaches his unique method for showing a half dyed silk without a half dyed handkerchief.

Cup and Ball- A practical ungimmicked single cup routine that ends with multiple final loads. Plus the real secrets behind working cups on the streets, and how to make your own set of cups and balls that don’t look like silly props.

All Backs Routine- A card is fairly selected and then when you go to find it, the deck is suddenly all backs. This handling not only justifies the all backs routine, but also looks incredibly fair. At the end of the routine the deck corrects itself and then only the chosen card is still all backs before being magically corrected.

In the Hands Triumph- The classic effect where the cards are shuffled face up and face down and the deck fixes itself is taken off the table and performed in the hands in a way where your audience swears that the deck is truly mixed.

Targeted Boomerang Fan Catch- Not only does Frank teach how to catch a thrown card in a fan, but also the secret to catching that card between two other selected cards and it works every time.

Sleight Section- For the sleight section Frank teaches his short card control, the Top Card Cover Pass and an in the hands false riffle shuffle.

Birthday Card Trick- Perfect for every one, even if they’re not celebrating a birthday.

Frank DeVille grew up in northern VA, just outside of Washington D.C. At the age of 17, he discovered a love and natural knack for magic. Within a few weeks time, he was performing on the street, bringing in enough money to pay his way through George Mason University, where he earned his B.F.A. in theater.

Highly acclaimed by his peers, his esteemed awards include the 2008 Peoples Choice Award, 2008 and 2009 winner of the “Robert Escher Close Up and Parlor Magic Competition,” and in 2009 he was awarded first place in the “Comedy Caravan’s Battle of the Hands.” Watch Frank perform and you will quickly understand why Alain Nu, star of TLC’s TV series “The Mysterious World of Alain Nu” said “Frank’s 6 bill repeat is the best I’ve ever seen.”

Frank has a very diverse, eclectic show. He has taken classic illusions and magic tricks and devised completely unique methods of performance that often fool fellow magicians. Frank’s degree in theater has taught him the art of improvisation, keeping the audience on the edge of their seats or doubled over laughing. Watching him in action, it is obvious that he has mastered the art of bonding with audiences of all ages.